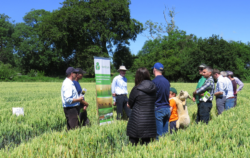 On the 7th of July 2022 Teagasc held a demonstration day at the site of our field trial for our Nutri2Cycle lighthouse demonstration which centres on a crop farmer using a variety of dairy sludges and organic manures as a means of reducing reliance on chemical fertilisers, and, as a means of closing carbon, nitrogen and phosphorous nutrient loops.

The trial has been ongoing at the arable farm site in Arklow, County Wicklow since 2019, with Arklow in Co. Wicklow located along the east coast of Ireland. This year the trial tested 5 manures & sludges in combination with chemical fertiliser on winter wheat plots, namely, cattle slurry; poultry manure; pig slurry solids; dissolved air flotation sludge, and, dairy activated sludge. Two further fertiliser types were trialled, which were all chemical fertiliser and zero fertiliser references. This resulted in 7 fertiliser trial plots which were replicated 4 times within the trial site, resulting in a total of 28 experimental plots.

By-and-large, arable farmers within Ireland are familiar with the concept of chemical fertilisers, cattle slurry, poultry manure and pig slurry solids, with many farmers presently availing of a variety of these fertiliser types. Amongst the community there is some familiarity too in using dairy processing sludges, but, there are challenges associated with applying such sludges, such as sourcing the sludge & proximity to dairy processing plants, and, having the equipment to apply the unrefined sludge within an arable holding. Dairy Processing Sludge (DPS) is derived from the volume of wastewater produced within dairy processing plants, in Ireland it is estimated that 125,000 tonnes of DPS is produced per year. Dissolved Air Flotation Sludge has been refined to removed oils, fats & greases through the technique known as Dissolved Air Flotation, while the Dairy Activated Sludge has undergone a further refinement step of biological degradation to remove organic materials such as bacteria populations. Both sludge types were used in this trial due to their nutritional value, as they are high in phosphorous, and, due to the volume of sludge produced per year within the country.

Both organic & conventional farmers, along with representatives from commercial fertiliser companies, attended the demonstration day. There was genuine interest displayed by the attendees on the ways of reducing reliance on chemical fertilisers while maintaining yield from both an economic viewpoint and from a long-term sustainability viewpoint. The Teagasc representatives explained to the attendees that the trial began with maize silage in 2019, followed by spring wheat in 2020, oilseed rape in 2021, winter wheat in 2022 and is planned to include winter beans in 2023. At present, we are awaiting 2022 yield data, the table below lists some average yields from the trial site since 2019. The treatments using organic manure/ sludge were supplemented with chemical fertiliser to ensure the total nutrient requirements of the crops were met, with the organic manure/ sludge displacing chemical nutrients based on their nutrient content.