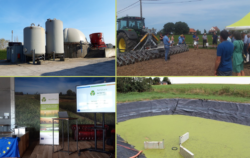 During the last months, several lighthouse demo days have been organized in Belgium to give the opportunity to participants to learn more about innovative technologies that are being investigated within the Nutri2Cycle project. During these days, participants were able to learn more about farm scale anaerobic digestion, the use of recycling-derived fertilizers as an alternative for mineral fertilizers, adapted stable systems and the cultivation of duckweed.

These demo days were organized with the support of Nutricycle Vlaanderen, the Flemish NTF.

Due to the current high energy prices, it is becoming increasingly interesting to produce energy yourself. For farmers, one way of doing this is via anaerobic digestion, a technology that allows you to convert your own biomass streams into renewable energy. In addition, anaerobic digestion also has the potential to reduce greenhouse gas emissions: a win-win for the environment and your wallet! To inform farmers on the possibilities of this technology, Inagro organized an info evening on April 25. During a general presentation, the technology, economics and some important points of attention were introduced. Afterwards, the 27 participants were able to visit the farm scale AD plant of Inagro.

Recycling-derived fertilizers as an alternative for mineral fertilizers

In Flanders, livestock production generates large surpluses of on-farm nitrogen (N) and phosphorus (P). High P content and uncertainty on N release from animal manure have led to an imposed legal limitation on N and P application rates from animal manure. Since Flemish soils are P-rich, the P has become the limiting factor in manure application, thereby also limiting maximum N application from animal manure. This creates a paradoxical situation where vast quantities of manure are processed or exported out of Flanders while tons of synthetic mineral N-fertilizers are used for crop production. The use of manure recycling derived fertilizers (RDFs) with predictable N release and low P content can counter this situation. At the moment, however, the RDFs derived from animal manure are categorized as animal manure and as such, need to comply with the same legal application constraints. Therefore, Inagro and Ghent University conducted a 4-your field trial in which several RDFs were tested on several crops. To inform interested stakeholders on the outcomes of these field trial, they organized another field trial visit on June 16 in Wingene (Flanders). 52 participants were able to see the impact of these RDFs on maize and to learn more on the costs and benefits and carbon footprint related to this. Furthermore, there was also a demonstration of a fertilizer machine suitable for fertilizing certain RDFs.

On September 6, Inagro and Ghent University organized a demo day at TIKAL Pig Farm in Pittem (Flanders), focusing on innovative manure valorisation techniques in pig husbandry. During the visit, about 30 participants were able to learn more about adapted stable systems and the cultivation of duckweed.

Duckweed can be a local and sustainable source of protein grown on nutrient-rich agricultural waste streams. This floating plant can therefore recover nutrients in the form of an alternative, protein-rich feed to meet the growing demand for animal feed protein and reduce the excess of nutrients in certain European regions. During the visit, participants were able to see an automatic duckweed harvester.

With an adapted stable system, where manure separation is done at source, there will be less ammonia emissions due to less contact of pig urine and urease, an enzyme found in the solid fraction. An additional advantage of such a system is that the end products can be valorised in a better way than pig slurry. For instance, the solid manure is suitable as input material for anaerobic digestion since it contains most of the organic matter, while liquid pig urine (containing most of the N and K) is suitable as fertiliser. This pig urine is being tested in our 4-year field trial.

At TIKAL Pig Fam, there is also an adapted stable system with manure separation at the source, paying extra attention to animal welfare as well.