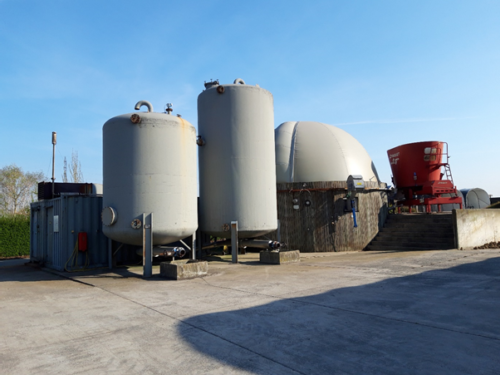 Small-scale anaerobic digestion is a technique by which famers can create their own energy by valorizing agro residues. The technique has been increasing over the last decade. To date, this technology occurs almost exclusively on dairy farms. However, a lot of potential remains to extend this technology to other sectors. Pig farms for example have a great potential to apply this technique. Unfortunately, mono-digestion of pig manure is not evident. In order to check the feasibility of applying AD on pig manure, researchers carried out a pilot scale test in the VLAIO LA project Pocket Power and the Horizon 2020 project Nutri2Cycle.

During small-scale anaerobic digestion (AD), the fermentation process takes place in a large reactor in the absence of oxygen. During fermentation, organic material (e.g. manure or agro residues) is being converted into biogas. The biogas (mainly methane) is subsequently burned in a combined heat and power (CHP) unit and results in a renewable energy source in the form of heat and electricity. The fermented biomass is called digestate and can be used on the farm as organic fertilizer.

To date, small-scale AD occurs almost exclusively on dairy farms. The transition from mono-digestion of cattle manure to mono-digestion of pig manure seems to be small. However, due to some important differences in the fermentation of cattle manure and pig manure, it is not evident. Fresh manure is crucial in order to obtain the highest possible biogas potential (how much biogas can be produced), so it is very important to transport the manure into the reactor as soon as possible. On many pig farms this is not evident, since the pig slurry mostly stays in the manure cellar for a longer period. Then, the biogas potential quickly drops to 32 m³ biogas/ton pig manure compared to 56 m³ biogas/ton cattle manure. A possible solution is an adapted stable construction, in which there is a primary separation at the source and the manure is drained several times a day. Because of the primary separation, there are less emissions in the stable. Furthermore, the biogas potential of the faecal fraction of pig manure is approximately 110 m³ biogas/ton. The drawback of this system is that the dry matter content of the faecal fraction is often too high to be pumped, which could possibly lead to operational difficulties with the installation.

To test the feasibility of mono-digestion of pig manure, Inagro conducted a pilot scale test to digest the faecal fraction from pigs coming from an adapted stable construction together with regular pig slurry in order to adjust the viscosity. The pilot plant at Inagro is a classical CSTR reactor with a total volume of 200 m³ and a filled volume of 150 m³. The installation has an electrical power of 31 kW and is operated at mesophilic temperatures (38 °C). The biomass is being mixed by a Peters Fermento Mixer (11 kW). The feeding consisted of a mixture of the faecal fraction from pigs (collected fresh by an adapted stable construction) and conventional pig slurry in order to adjust the viscosity. The aim was to collect as much manure as possible of the same quality throughout the testing period. The faecal fraction and the pig slurry were fed via a screw press and silage tank, respectively. The hydraulic retention time was around 35 days. Thorough monitoring and many analyses showed that the energy production was stable and without major operational problems.

Therefore, mono-digestion of pig manure seems to be feasible, although it should be noted that it is important to mix thoroughly in order to prevent foam formation. Furthermore, the biogas potential of the digestate was still quite high. This indicates that it is better to keep a longer residence time than during this test. On lab-scale it turned out that everything was converted to biogas after only 45 days, although after about 10 days 70% of the total amount had already been reached. A possible alternative line of thought could be to recirculate part of the digestate back to the digester. This digestate can then be used to adjust the viscosity of the faecal fraction instead of using pig slurry. Using this approach, more energy is produced from the same amount of pig manure and emissions from the digestate storage are reduced more. Further research is needed to check the feasibility and possible drawbacks of doing this.

It can be concluded that small-scale AD of pig manure seems feasible, but keep in mind some specific points of attention: primary separated manure has a better biogas potential than pig slurry and fresh manure is crucial to obtain as much energy as possible. By an adapted stable system, small-scale AD could definitely be expanded to pig farms, although it should be noted that the profitability of this technology is strongly company-specific.